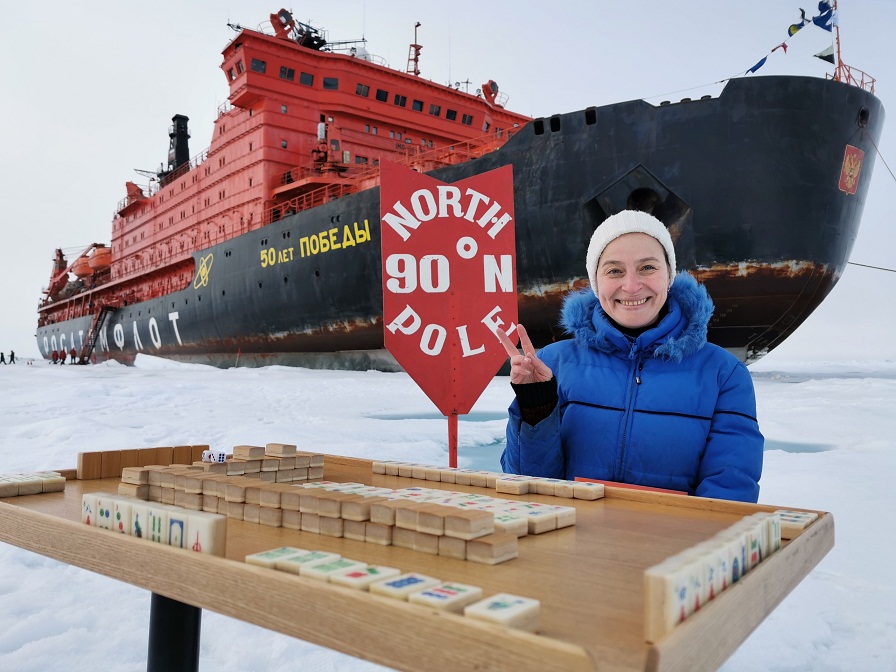 The world’s first North Pole official Chinese traditional mahjong tournament took place on August 20th, 2019. This event was held during the special mission of the most powerful nuclear icebreaker in the world “50 years of Victory” to the North Pole.

On the occasion of its 60th anniversary, Rosatomflot granted 68 talented children from all regions of Russia polar expedition to the top of the world. Presidential grantees, winners of all-Russia olympiads and contests, organized by ROSATOM school, Russian Schoolchildren’s Movement, Sirius Center and Atomic Industry Information Center, were chosen during the year to become young polar explorers.

“I was invited to this wonderful journey as a disciple of Russian Mahjong Federation School “Hieroglyph”. Our task was to initiate gifted Russians into mahjong. More than 40 children and mature members of the expedition were taught to play mahjong at their leisure. Eventually, the level of training let us carry out the official tournament.”

Eight children took part in the final tournament, which was played 1h 40min. Nikolaeva Viktoriya from Snezhinsk won four times in a row and headed the list. Arkhipov Sergey from Ivanovo took the second place and Grabarnik Ivan from Moscow took the third.

All the participants were granted Russian Mahjong Federation certificates, special prizes, diplomas and signed copies of “Mahjong for beginners”. The youngest polar explorer Platon Klivakin from Novosibirsk couldn’t take part in the official tournament but he learned hard the basic skills and took the special prize “For loyalty to the game” and certificate.

The winner took the main prize – one of the first mahjong set brought to Russia in 2003. Another mahjong set was sent to Russian Arctic National Park. We hope this gesture will make the fertile ground for carrying out the mahjong tournaments not only between Russians but also between tourists from the Orient.

“Schoolchildren came back home. Hope they are inspired by arctic expedition and mahjong as well and begin to popularize this game in their hometowns. This in turn will help young people to establish relations with the Orient.”

Mahjong is a popular chinese game, developing combinatorial thinking, mathematical logic, patience and the skills for inner peace as well. This game demands practice, good memory and a quick eye. Russian Mahjong Federation is non-commercial organization to popularize all kinds of mahjong in Russia. It carries out the official tournaments and conducts rating of players. Web-site: www.mahjong.ru

Russian Arctic National Park is the largest arctic protected natural territory of over 8.8 million hectares. It consists of two areas: the northern part of Novaya Zemlya and Frantz Josef Land (the northernmost island is 900 kilometers from the North Pole). Russian Arctic National Park was intended to promote research activities, outreach activities and events that educate people about environmental issues, the conservation of nature and protection measures in the territory. Eco-friendly cruise trips have continued to flourish in the area. Web-site: www.rus-arc.ru

View the embedded image gallery online at:
https://www.mahjong.ru/index.php/news/57-russia/470-news-northpole-2019-eng#sigFreeIddcaf19cda4
back to top